When is SQL Server ‘not enough’ and/or ‘too expensive’ for your application performance scalability needs?  Caching is a popular mechanism used to accelerate response times and help applications scale while reducing the load on RDBMS systems, and save on resources.

Redis is a widely used in-memory NoSQL database, which can be used as a database, cache and message broker. This blog post explains how to get started with Microsoft SQL Server and enterprise grade Redis from Redis Labs.

WHAT IS AN APPLICATION CACHE?
Application caching is a technique used to speed up application response times, to help applications scale and to keep critical data highly available in the event of system failure. It works by placing frequently needed data close to the application, most often placing this data in memory using a NoSQL database such as Redis for the fastest application access.

WHAT IS REDIS?
Redis is a fast, lightweight and powerful open source NoSQL database.  Redis is written in C and it compiles into extremely efficient machine code which requires very little overhead. It runs entirely in-memory, and is optimized to deliver more than 1.5M ops/sec with less than 1 ms latency with a single standard server. This allows for really fast application response times, increases throughput, reduces database traffic, with the lowest spend! This approach also reduces the number of RDBMS licenses you need.

Redis is used as a database, a message broker, or very commonly as a caching layer because it enables true statelessness for an application’s processes, while reducing duplication of data or requests to external data sources. Although entire data sets are most commonly served from RAM, Redis also can be enabled to support data persistence and backups. With Redis Labs Enterprise Cluster, you get a natively distributed architecture, that scales as the application workload scales and reduces your database workload.

HOW TO USE REDIS CLOUD WITH SQL SERVER?
As an example, I’ll show how to use Redis Cloud as a application cache for a web application that uses SQL Server as it’s primary database.  Although the caching paradigm is a well-known application design pattern, I find that many of my customers are not familiar with using external NoSQL databases, such as Redis, to address this need. Shown below is an example architecture and also a link to a screencast with a demo of the application and even more information about using Redis Cloud.  The business scenario is to cache user login information. 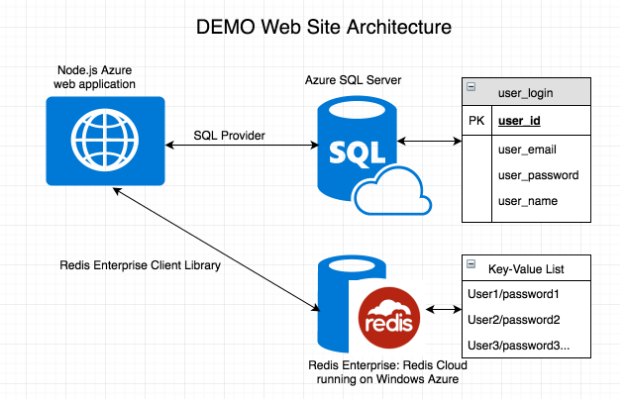 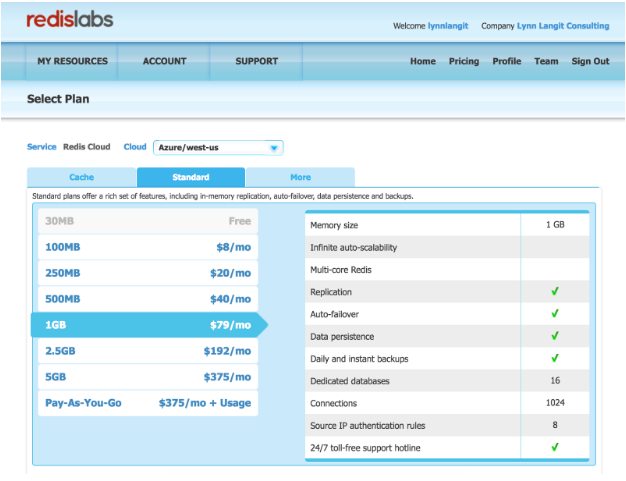 Next, as an example, I’ve set up a node.js web application which uses Azure SQL as a it’s primary database.  This website includes a user login functionality.  The user information is cached using Redis Cloud.  Complete application source code is on Github at this link –  https://github.com/lynnlangit/RedisLabsDemo

In this demo, a simple node.js website uses Azure SQL for the user login information. The application login screen is shown below.

Also shown below is the structure (column names and datatypes) of the Azure SQL User Table.

Why don’t we just use Azure cache? The answer is simple. Azure cache is not persistent and does not come with built-in high availability at the same level as Redis cloud. Redis Cloud runs in Azure, so if your application is hosted in Azure, then you don’t have to worry about latencies between Azure and other environments. Operationally, scaling Redis Cloud is also a lot simpler since it happens behind the scenes, without you needing to select larger instances or having to change your application in any way.

In this demo, the use case is to retrieve the user login credentials from cache (Redis Cloud) rather than from Azure SQL.  The business reason for this is to accelerate the website login performance.  The data types used are simple strings presented as a username and password.  This is obviously a POC application, just meant to demonstrate core functionality and is no way shape or form anywhere a production quality application,

To set up the demo, configure the ‘env’ file to use your values and rename it to ‘.env’.  Run the ‘deploy-site.sh’ in the azure-scripts folder to execute the setup scripts for the Azure artifacts (website and SQL database).  See detailed setup instructions at the end of this article.  If you’d prefer to create the Azure website and Azure SQL instance by clicking on the Azure portal, you can do that as an alternative to running the setup scripts that I have supplied for your setup.

To test the demo, create a new user on the webpage, and then login with the new user account.  Log out and log back in with that new user account.  You’ll then be able to see the traffic on the Redis Labs website for your Redis Cloud cluster.  An example is shown below. 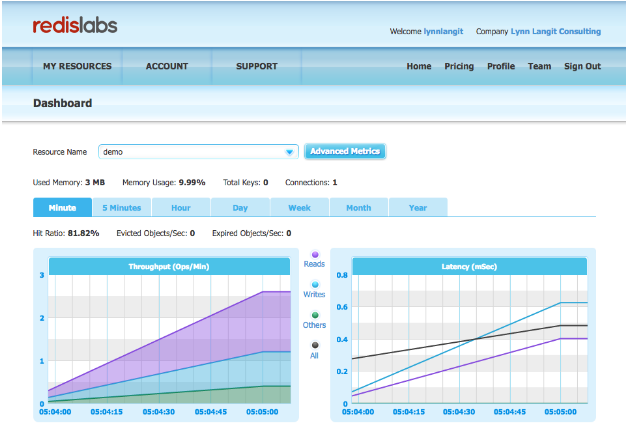 The code that makes this call to a Redis Labs session store possible is straightforward. It is found in the /services/ folder of the GitHub project in the ‘redis-cloud.js’ file.  I’ve detailed the key lines and provided a copy of this code below. 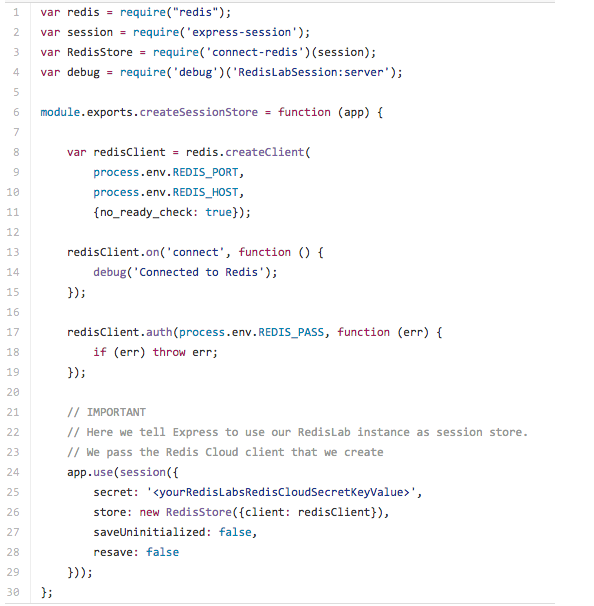 The ‘users.routes.js’ & ‘users.service.js’ files in the /users folder of the sample makes the actual calls to the session store for the username and password information (stored as key/value pairs), which has been set to use the Redis Cloud instance in our demo. Since we have already set Redis as our session store, any calls to session in our node.js code will access Redis.  Shown below on lines 28-33 from ‘users.routes.js’ is the call to get the session key.

This demo application demonstrates how quick and easy it is to add Redis Cloud to your SQL Server-backed web application for the user / password caching use case using the standard session pattern.

Redis provides pre-built data structures including strings, lists, sets, sorted sets with range queries, hashes, hyperloglogs, bitmaps and geospatial indexes with radius queries. Its ability to allow data objects to be stored in their original format, data can be processed on the database level rather than the application level. Using this architecture, an application can retrieve only discrete elements from the object, as opposed to other key / value data stores that require the application to retrieve an entire object value (blob), then de-serialize it and parse it in order to get the desired part. This enables blazingly fast access and analysis on stored data.

Redis’ true value is providing advanced data structures and operations to application developers. “Intelligent caching” is more than leveraging these data structures via the GET / SET operations; it’s the act of exploiting their unique properties to efficiently and optimally manipulate data. Two examples of intelligent caching are its commands that modify the data in the server and its ability to execute embedded Lua scripts.

Every operation in Redis is atomic, ensuring the integrity of the cached data and provides a consistent view to the processes sharing it. Additionally, Redis cache contributes to an application’s availability. External data sources can experience failures resulting in degraded or terminated service. During these outages, the cache can still serve data to the application, retaining availability. Redis cache has data persistence, in-memory cross-region / data center / cloud replication, instant automatic failover, backups, and disaster recovery.

WHEN TO USE REDIS CACHE?
A cache’s main purpose is to reduce the time needed to access data stored outside of the application’s main memory space, reducing bottlenecked performance and freeing up application resources for other uses.

Redis cache is a great alternative caching solution vs. caching available in SQL Server because the SQL Server’s main memory – RAM – is finite, sometimes volatile, normally non-sharable and comparatively expensive. Redis cache’s ability to store its data on disk allows for greater scalability, durability, concurrency, and cost-effectiveness. Redis cache is a great replacement for session storage such as for applications running on web farms or on Microsoft Azure where maintaining state is difficult.

When you have multiple data structures in various formats and sizes and need a flexible schema-less design, Redis data structures allows you to easily scale your database as if it was a simple key / value data store. Several of Redis’ commands operate on multiple keys. Multi-key operations provide better overall performance because there’s substantially less communication and administration. It is binary safe, and any single element in Redis can range in size from 0 bytes to 0.5 GB.  Also if complex data-structure is used, such as hash, list, set, (this limitation refers to a per element), then the entire object can be much larger.

CONCLUSION
Redis Labs products, (Redis Cloud for cloud-based applications or Redis Enterprise for on premise applications) are simple, powerful and a natural choice for application caching with SQL Server.

DEMO SETUP INSTRUCTIONS
Redis Labs RedisCloud as a user caching store for a node.js app with SQL Azure.  NOTE: Instructions are for OSX